You are here: Home / Inspiring Party Planning Ideas / Talk about Music You Like

There was a daughter and several of her siblings planning an intimate anniversary party for their parents. The daughter and siblings said that their parents liked big band music from the 30s and 40s and we were trying to figure out what ensemble would be the best. It came down to Piano and Sax or Piano and Swing Violin. This party was more or less a surprise party and I didn’t have the opportunity to speak with the celebrants. The daughter and I had gone back and forth about which ensemble would be the best for quite some time. The event was an intimate gathering and because the room was small and Tenor Sax can be loud in a small room I directed them to Piano and Swing Violin. 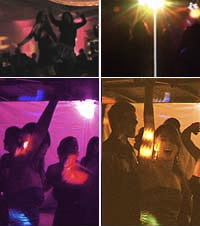 During the evening I conducted toasts as their Master of Ceremonies and after scheduled speakers opened the mic to guests who wanted to speak and tell stories about the couple. During the course of some very heartwarming and sometimes humorous stories it came out that the celebrants and some of their guests enjoyed Square Dancing! Fortunately, I had my “Swing Violin Player” and he knew some Square Dance Fiddle Music. So, after toasts we ripped into “Foggy Mountain Breakdown” and quite spontaneously everyone started to clap in time and form a circle  and the couple got up and did a kind of hoedown Square Dance; a surprise ending to a very lovely evening.

Had I had the opportunity to speak with the couple I would have found out that they were into Square Dancing. It was a good thing that we had the Violinist there because Tenor Sax is not the right instrument to play Square Dance Music.  By the way, that was their 50th anniversary and we just performed for them again this time for their 60th anniversary!

I very often work with catering directors and wedding coordinators who have clients who need help with music. Sometimes a bride has requests or has questions about music that her coordinator is really not prepared to answer. After a short discussion I usually know exactly what the client wants and what direction to take to provide it.  See:  Beautiful French Themed Wedding @ Calamigos Ranch Malibu.

Talking About Music Starts an Adventure

It is quite an adventure to speak about music with anyone. Finding out what they like and finding out what their guests like is essential to the success of any special event. During the course of conversation a little gem falls out like “a style of music” or “movie theme” or “a special song that a parent used to sing to them when they were young” and that makes all the difference in the world. See: I Had An Epiphany.

I look forward to speaking with you.