You are here: Home / Inspiring Party Planning Ideas / The Joy of Creating a Special Event 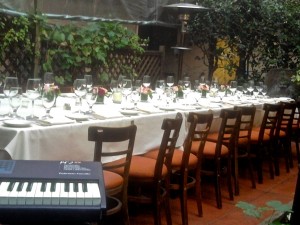 An eye for detail.

Below a brow furrowed in concentration is the eye of an artist in final preparation for a performance. In this case he is not only a participant in the performance, he has the additional responsibility of being the director and producer; the creator of his wife’s birthday party.

Everything is in place.

The party is in a beautiful backyard garden setting enchanted by tiny lights; full service restaurant stocked, staffed and poised to serve but what is missing? One would think he would be satisfied that all plans and preparations are complete. Center pieces, cases of wine, gifts. All of the objects were in place but his concentration did not abate. All objects remained exactly where they were placed; but what was missing? Something was missing.

A look of satisfaction came to John’s face the moment the first guests arrived. The scene so carefully set had come to life. Immediately is attention was no longer on the objects. The success of his wife’s birthday party was assured as more guests arrived to interact with each other in the beautiful space he had created.

I first met John and Mary Lou when they were planning their wedding. John and Mary Lou are vocalists and as performers know what it takes to produce a successful event. Elegant Music provided Live Music, DJ Dance Music and Announcing for their wedding at the Braemar Country Club. It was such a pleasure to work with them then and now. Happy Birthday Mary Lou!