The Legend of Jack Frost

Sara and Lance danced in the California Contemporary Ballet’s “Legend of Jack Frost “. This is a new ballet choreographed by Aerin Holt with original music by Dwight Mikkelson.

All I can say is that it was a beautiful performance in every way including staging, set design, lighting, costumes, aerial choreography and music.  There was little time to work on the show.  It was only a few months of rehearsal but our kids were professional about it and worked hard.  Everything came together, words can’t describe it, must be experienced.

Read more about this production:  The Legend of Jack Frost

Sheila and I are so proud of our kids.

So I did this gig last year with two vocalists where the three of us strolled around the dining rooms of Universal Hilton singing Christmas carols.  Well this year the other two vocalists couldn’t make it.  I had to think about how I could still do the gig.  Now, Sheila has been conducting the choir at Fair Oaks Academy and the kids know a few Christmas songs, so, I got my family together (amongst a full schedule of Jack Frost rehearsals and holiday gigs) and we rehearsed.  In addition to all of us singing Lance played “O Come All Ye Faithful” on the recorder, Sara played finger bells and shook sleigh bells, Sheila played flute and I played string bass.  We had a lot of fun and liked it so much that it might become a family tradition; well, we’ll see come next December. 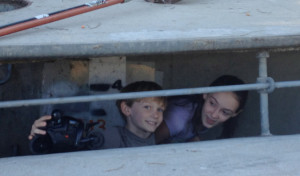 Toy Rescue Mission in the Sewer

When something goes down the sewer, that’s it! it’s lost; or so I thought.  Santa brought Lance a remote control motorcycle that went so fast as to be “street legal”.  Well this thing wound up going down a drain on our street.   Despite the thoughts of what might be lurking in the sewer both Sara and Lance eagerly climbed down a manhole cover and the toy was rescued.

Which college team will be going to Disneyworld? commercial.

Experiencing life from the bottom to the top we have had a very full 2014.  Though you are busy too, thank you for staying in touch.