Can you keep a secret?  Ideas can have seemingly unlimited power laying on one’s mind.  Withholding even good news until the moment is right can just about kill a man.

Well, all the guests at this party were good at keeping the secret of a “surprise birthday party.”  The guest of honor was indeed surprised.  She honestly thought that they were going to a friend’s anniversary party being held at a particular restaurant.  (Noah’s Ark Cuisine family restaurant and banquet hall; great Mediterranean food!) 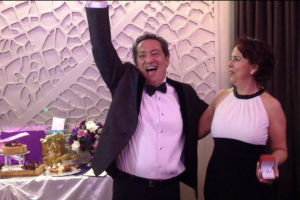 The host had contacted me about a month prior to the party; a very creative man.  Elegant Music had performed for other events for his family, a wedding and a christening.   But this time William had something to confide.   Yes, it was a surprise birthday party, but he was planning to “propose” to his girlfriend of over 30 years at the party on January 2, 2016.  I said, “Wonderful!”

Then he asked if I  knew any officiants.  We’ll, Elegant Music has been providing music for weddings and parties in Los Angeles for over 25 years and so yes, I know some very good officiants.  “Good,” he asked, “Do you know if any of them are available on January 2nd?” and that’s when it hit me, not only was he “proposing” but he was also “planning to get married on the spot!” 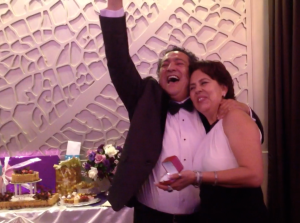 Now, I have worked with brides and their families for these 25 years and I have learned that a wedding is something that the bride and her family carefully plan.  Surprise or not, the ramifications of the host denying his bride the opportunity to plan her own wedding was not something he had thought out.  This was the first thing that weighed heavily on my mind.  Now maybe the absence of this consideration in the mind of our host was one less thing that could bother him while keeping this elaborate secret a secret.  But now I shared the secret!

In talking to guests as they arrived at the “birthday party” I realized that none of them knew what was going to happen.  That I was the only one in the room who knew! Our host had not told his sister who was to take pictures, not even the caterer.  Aside from the officiant and myself he had told no one else!  I just had to tell someone.  So I told the musicians.   Seeing their reaction made my anticipation that much greater!  How could our host have borne this for so long?  How could he bear it any longer?

Now being with someone for 30 years you can kind of get to know them and expect certain things or at least tolerate certain things.  I have to say that William’s toast leading up to his proposal was from the heart and sincere.  This man is an excellent speaker.  Watch the video!

I think Elegant Music caters to a certain kind of public.  They are: well spoken professionals, they understand design and presentation, music is important to them…

William is a very creative guy, very romantic; he even sings!

PS:  I look forward to speaking with you about your ideas for your special event.  And by the way, I can keep a secret :-)